The old delicacy of “Friulian salted cheese” from
the traditional salmùeries in Pieve d’Asio.

Asìno cheese, which originated on Mònt d’Ás in the splendid setting of
the Val d’Arzino in the municipality of Pieve d’Asio, after which it is named, has a salty flavour known as salmistrà in Friuli,
and has long been favoured by the most discerning palates. In fact, centuries ago its production was destined mainly for export:

“ ...soft, delicate, white and almost spongy,
it delights the palate and graces the finest tables of Venice, Trieste and the neighbouring towns.”

The secret of Asìno lies in the soaking of small fresh cheeses in a brine called salmùerie, made from milk,
cream and salt in secret proportions handed down through the generations. Together with the producer’s sensitivity
and experience, the ancient recipe yields tasty cheeses whose flavour has remained unaltered over the centuries.

The first certain source that mentions Asìno is the Latin Rerum
Foroiuliensium, written by the historian Enrico Palladio in 1659:

The popularity that Asìno has always enjoyed is attested by a letter
that the Bishop of Concordia, Giacomo Maria Erizzo, sent to the parish
priest of Asio in 1749 to ensure adequate provisions:

“...it is the season of Asìni cheeses and I would not wish there to be any
misunderstandings for these fruits…” 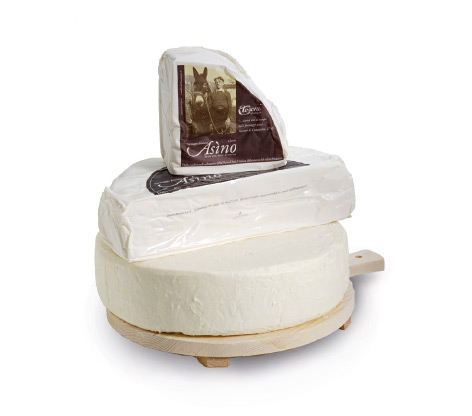 We have always used the old techniques for the production of our creamy, spreadable Asìno cheese. Tosoni’s salmùeries are among
the very few still active in the whole of Friuli and are almost 200 years old!

Our passion for our work is aimed at offering a cheese with a glorious past and an equally glorious future.

Asìno may be the oldest Friulian cheese. It originated in the mountains of Pieve d’Asio, in the area of Clauzetto and Vito d’Asio (province of Pordenone) using age-old preservation techniques. Already popular in 17th-century Venice, the secret of Asìno lies in the soaking of small fresh cheeses in brine called SALMÙERIE, made from milk, cream and salt.

Two types of Asìno are made: TENERO and CLASSICO. The difference lies in the type of cheese used to make them (a soft cheese for the Tenero and a harder one, similar to Latteria Friulano for the Classico). The fresh cheeses are immersed in wooden vats containing the salmùerie (a mixture of milk, cream and salt that has the unique characteristic of never going bad if properly tended; on the contrary, the older it is, the more highly it is prized), where it is allowed to mature for a period that can vary from a few weeks to several months. The length of soaking varies according to the type of product desired.

After being removed from Tosoni’s centuries-old Salmùeries, the cheese is milky white and rindless. Its consistency depends on whether it is Asìno Tenero or Classico; the latter may have holes.

In Friuli, it is traditionally accompanied by polenta or boiled potatoes: a marriage made in heaven! However, we believe that it is a cheese that can be used in many different ways, for example with vegetables, in fondue, on meat, or melted in a fluffy omelette.

Cookie settings
This site needs your consent to use cookies with relation to services performed, social media and publicity. To manage or modify your cookie settings, click on “Settings”. Our complete policy regarding cookies is available here.
Website functions
These cookies are required in order to perform basic website functions and therefore, they are always enabled. These are cookies that make it possible to recognise the user who uses the website during a single session or, if required, also during subsequent sessions. This type of cookie makes it possible to fill your basket, to easily carry out payment transactions, to solve safety-related problems and to ensure conformity with current legislation.
Social media cookies provide the possibility to connect with your social networks and to share contents from our Website through the social networks. The (third-party) advertising cookies collect useful data that make it possible for us to provide you with advertising information that fulfil your interests, both on Tosoni and on third-party websites. In some cases, these cookies foresee the processing of your personal data. The disabling of these cookies can lead to the display of non-pertinent advertisements or it could prevent you from viewing Facebook, Twitter or other social networks and/or the sharing of contents on social media networks.